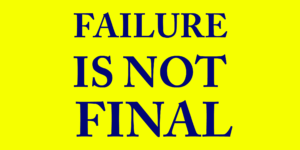 When you write your first Matric exams and you pass a few subjects, then you consider writing a supplementary immediately and then actually your marks goes down on the subjects you re-wrote. Then you register again for your first end of year Matric re-write and again you fail, you try second year and again you fail.

Someone is thinking that it is not possible for someone to fail like this, but believe me; I have seen this happening countless of times. And the problem is not the repeating or the re-writing of the exam but the biggest problem is the emotions and the feelings that person goes through that matter the most. It is the thoughts that come to that person’s life and his mind looks around and starts telling him/her how useless or unqualified he/she is.

Failing any exam in high school

A person who also fails any exam especially in high school also goes through the same type of feelings. This is a person who writes the end of year exams and failings critical subjects that are required for minimum requirements to pass the grade, for example such as failing your vernacular, or English or Mathematics or failing more than two subjects. Again, in the first year the person repeats, and then in the second year again they repeat. When the school sees that the person is going for the third year and not making progress, they might actually pass them to the next grade. In the new grade the same thing happens and they fail the grade. This affects the person and feelings of failure and poor self-confidence clouds his/her mind

What a person who fails Matric exams usually goes through-feelings

A person who fails Matric usually goes through certain feelings as a result of the thoughts that they think at that time. At first when they fail the first exam, let us say they failed two subjects, immediately they think that it was a small miss and they will improve the mark during matric supplementary re-writes which usually occur about two months after the results are out. So they register and surprisingly for them, the exams are now even more difficult than in the first exam. The explanation is simple-the exams are written after a big holiday which is the Christmas holiday and no one gets the time to read during then for a full month, and with Grade 12, the exam would have ended much earlier meaning they spend two months in full before results are out resting. So the mind will have forgotten most of the work. 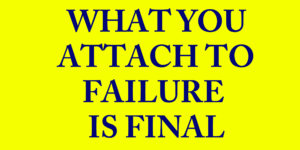 Feeling the disappointed and somehow knowing that they failed after leaving the exam room, they hope and pray they pass. But as you know, results come and the person fails. Again still hopeful, they register for the first end of year exams, this time thinking they will make it with lots of available time to study and after all, the first they have only two subjects now compared to the previous seven so how can they fail this time.

To even make it better they start attending the ABET night school. But as time will tell, it takes more than saying and wishing to make it, it takes discipline. The person attends for three months and as you know the quality of ABET education is poor with teachers attending on and off. This demoralizes the students who continuously come only to find that for a week their teacher was not turning up. In turn they also start missing classes. At first time it will be one day there and another day absent, but as winter approaches, the whole winter the person is absent. Of cause they will be genuine reasons why they did not attend but still the point is they did not attend or study. Others when they see that teachers are not attending them, they also decide to do it at their homes and this only works for a few days and the motivation is not strong enough and soon they stop.

Matric exams comes in November, and again fear grips them now because they realize that they are in bad shape with their content and desperately try to study in the few weeks before the exams. The pressure is too hard that the mind quits inside of them. The person feels disappointment at themselves, and though they outwardly blame the ABET teachers and everybody else, deep inside they know that they are fully to blame. The minds now start telling them about their poor self, how useless they are. They look around them, at their friends and colleagues who are not going for their second year at university and they feel overwhelming feelings of despondency and uselessness and why them. The mind start showing them that in life they will never ever make it without this matric.

Someone they get enough motivation to register again for re-writes at the end of the year, but the year again is too long. Obstacles come along the way and life takes over. Some they start looking for jobs and after going for a temporary job of three months they feel the books are even heavier than before. They quit on themselves and when exams comes, some don’t even bother to go and write because they now know the outcome already-a fail.

Sad as I sound but this is the truth and if you are in the same shoes the truth again is you can pick yourself up and get this matric done with. If you are in Matric or lower grade ensure you avoid this trap way early. Again you can pass your matric and get your matric certificate if you tell yourself enough is enough.

What does it take then to pass my matric exams?

Only one word-self-belief. It takes you to fully believe in yourself that you can make it that will give you enough motivation and energy to pass. There is nothing more difficult than helping a person who has concluded they he/she won’t make it. So the definite way is to restore that lost self-belief and start trusting yourself again-that it is possible. Find the motivation enough and let feelings of hope fill your mind and heart. Tell yourself that this nonsense must stop, that your life is bigger than these matric exams, and that you will prove you can make it. Then a rigorous action towards your motivation and new hope must follow as only hoping without doing is fantasy. This needs small baby steps and in the end you will find you have picked up good habits and you are on your path to passing your exams.

Will you pass them easily like that? The answer is yes. But it is not as easy as you think. But as exams come, yourself belief will make you do things you never did before. It is all in the state of the mind.

For now let me end here. Send me your thoughts,