Do Technical Matric N3 if CAPS or NCS is a problem 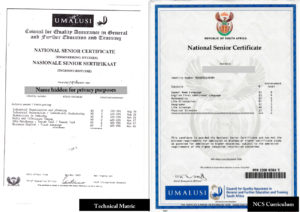 Most people are still stuck trying to redo the subjects to get their National Senior Certificate and the solution offered here is to do Technical Matric N3 if CAPS is a problem.  Technical Matric is one of the curriculum most people are not aware of however it does have opportunities if you can understand the requirements.

Advantages of doing Technical Matric instead of CAPS

There are many advantages of doing Technical Matric but the most important ones are the following:

Technical Matric is equivalent to a normal National Senior Certificate with NQF level 4 as per South African Qualification Framework (SAQA). And all the Matric Certificates are also rated at NQF level 4. Hence it has the same value as other Senior Certificates. You can read more information on SAQA regarding Matric by clicking here

It takes less than 1 year for one to complete their Technical Matric Senior Certificate. The exams are written in every trimester and depending on the individual, these can be finished in the first two trimester for example from  May to July you can write the first exams and then from August to November finish up the other subjects and obtain your complete Matric

The subjects that are done with Technical Matric are must simpler compared to the current CAPS subjects or any other previous curriculum. The subjects offered are only single paper exam subjects with Languages (Business English and Sake Afrikaans) being open book exams. Studying of these is thus ideal especially for people who are already working and can even be done during weekends or part-time. I don’t know about you, but some of the things must not be done the hard ways always, and Technical Matric is one of those alternatives to reach the same point in your career however through a much easier way.

Though Technical Matric does not qualify one to most Universities, there are some Universities like Tshwane University of Technology (TUT) that does recognize it as one of the qualifications they need for someone studying especially towards the engineering fields. For more information on this, read the article by clicking here.  Other opportunities it offers is that it open doors for one to study other careers with colleges that require only Matric as a minimum entry.

Technical Matric is cheaper to study than current CAPS

Doing Technical Matric is much cheaper mainly because these subjects are only 3-4 months and then one writes exams unlike the 11 months studying which is required for CAPS. Hence it becomes cheaper to study for N3 than the CAPS

In order to have a Senior Certificate in Technical Matric, the following are the general requirements:

For more information don’t hesitate to leave comments below.