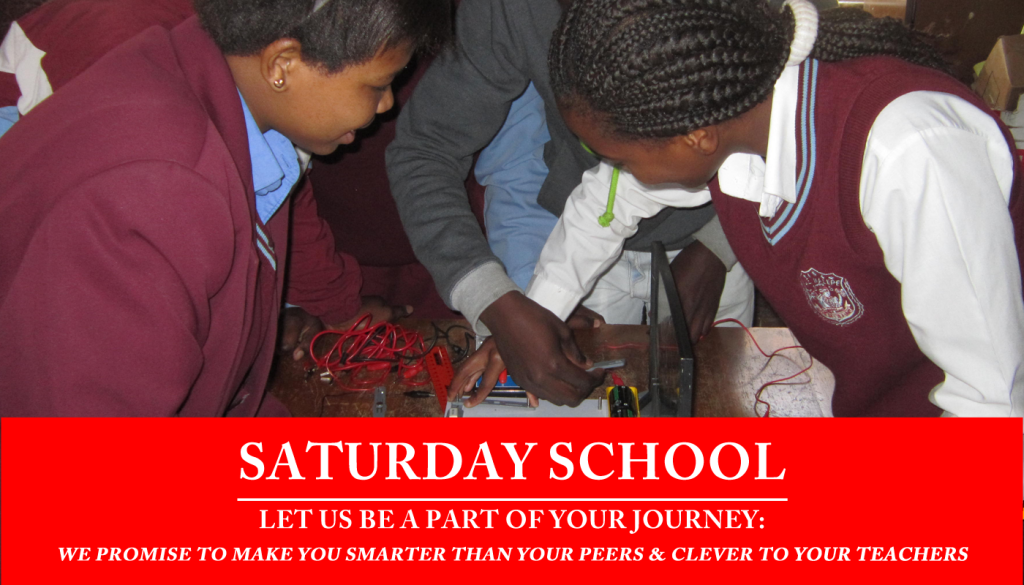 The main vision of the Saturday School is to tranform average learners into above average learners. To take learners performing at below pass to make them pass and qualify later for their dreams. Observation has shown that learners fail, not because they are stupid or dull, but because the system that they are passing through is somehow of poor quality hence they become a victim of their environment. To justify that, look at the pass mark currently which is at 30% for most subjects. Despite this low mark, learners cannot achieve this mark, meaning we have more than 50% of the schooling population below 30% pass. We can blame and blame but we at Ekurhuleni Tech decided to take action. To make you as our learner above average. Because in truth, you are already passing but the conditions do not allow that. The Saturday School was then created to provide such an enabling environment to make you achieve your goals and later fulfill your dreams. Let me talk to the parents, if you see you child struggling all of a sudden because of a change in grade, that is the time to take action and seek outside help. It might look expensive in the meantime, but its way cheaper than later when they have to sit at home and be considered failures. As someone said, if you think education is expensive, try ignorance. Meaning ignorance costs us more than education, through unrealized dreams, poor quality jobs, poor friends and associations, low self esteem, you name it. But we can turn the table for your child. To our future Saturday Schoolers, we say WELCOME. Your life will never be the same again.

When I came to the Saturday School, I was unsure of myself. I was used to getting low marks always but since I started the Saturday classes my marks have improved. I’ve seen a lot of Maths mistakes that I was making in all areas of my Maths especially Algebra. I was clueless when it came to trigonometry but now I have a better understanding. My Maths improved a lot from 20% to 40%. I enjoyed the classes and I am grateful for the experience.
Mbali

I actually don’t want to impress anyone but I really really benefitted from this Maths Saturday class. My Maths actually improved, my school educator complimented that I have actually improved and that I have a big potential. Areas most improved were simultanoes equations, trigonometry and rationalisation. Am grateful that I was part of it. Best 3 months of my life, I also met different students.
Bret

Saturday school Maths lessons have beneffited me in many ways like for instance Confident our Maths Tutor helped me parts or areas in Maths I have difficulties. Ever since I attended my Maths marks improved tremendously by 35%. I hope the Saturday classes will also continue next coming year.
Celo

This is an excellent way to improve my Maths. My Maths in terms of confidence has improved which has allowed me to achieve the distinction I wanted. I would definitely attend next year

The Saturday school was very helpful to me in many ways. My mathematics marks went up by 40% since I started attending. My algebra though still needs to improve. Thank you for the opportunity to attend the Saturday school
Katlego